This fluffy and crispy waffles are made out of chickpea flour which is naturally high protein. Vegan, gluten-free and only requires 5 ingredients.

My chickpea flour has been sitting around for ages and I have no idea what to do with it. One day, I came across a chickpea pancake recipe and have the idea of making chickpea waffles. I actually do not have much faith in this recipe. For starters, I never made waffles before. I had tried to bake with chickpea flour in the past, but there is this raw-y ( I know this is not a word) taste that I cant tolerate. ( Hence the reason why my chickpea flour has expired. )

Surprisingly, the waffles turn out to be DELICIOUS. Airy and fluffy, this has been my go-to breakfast lately. Most importantly, you cant taste the chickpea flour. Even my picky non-vegan brother likes it !

To be honest, most of my waffles ended up splitting in halves the first few times making it. After doing some digging and testing, I found some helpful tips that help prevent this disaster from happening :-

Here is a rundown of ingredients used :

The waffles are also freezer friendly, which makes it a perfect meal prep recipe. Just double or triple this recipe and you will have a whole week worth of brekkie. 🙂 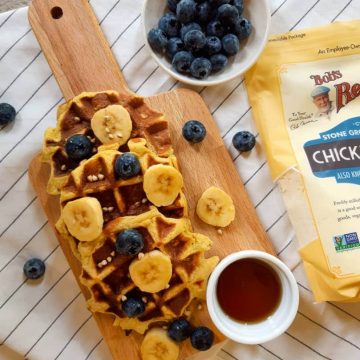 * You can actually make your own chickpea flour ! Full instructions here Leftover waffles can be stored in the freezer for up to 3 months. To maintain the crispiness of the waffles, simply place them in the oven at 100c .
Keyword chickpeas, high protein, waffles