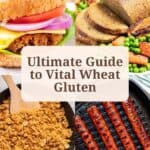 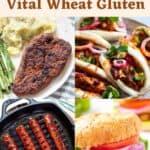 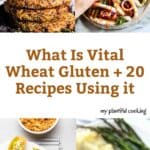 Heard of vital wheat gluten but unsure on how to use it? This detailed guide covers questions like what is it, how to use and where to buy this versatile flour. This post also contains 20 best vegan recipes using wheat gluten, from meaty seitan to fluffy breads!

Whether if you are a vegan or not, I am pretty sure you have came across this ingredient at least once, usually in the baking breads or in the making of mock meats or seitan.

Vital wheat gluten, or also sometimes known as wheat gluten or gluten flour, is a flour that is extremely high in wheat protein - gluten. To put it into context, normal all purpose flour contains about 9-11% protein, bread flour with 11-13%, while a whopping 70% of wheat gluten is made from protein.

This flour is made by first hydrating wheat flour in order to activate gluten protein. Further processing is needed to remove everything else, leaving only gluten behind. The mixture is then being dried and ground into fine powder.

Gluten flour can be found in most well-stocked groceries, usually in the baking or health food aisle. You might also find them at specialty stores or heath food store, or you can order them online through retailer like Amazon.

I personally really love the Bob's Red Mill ones. Other recommended brands to get includes King Arthur Flour and Anthony's.

Healthy is a pretty relative term, and can mean different thing to different people. But according to Healthline, seitan, which is made from gluten flour, is a relatively nutritious food that is packed with protein and minerals.

For starters, a ¼ cup (about 1 ounce) serving contains 23g of protein and 104 calories. For comparison, an ounce of chicken only contains about 8g of protein! It also contains little to no fat, and is free from saturated fat.

Due to its low carbohydrate content, it might also be suitable for those who are on a low carb or keto diet.

Lastly, it is naturally soy-free, making it a great protein source for vegan and vegetarians that have soy allergies.

As vital wheat gluten contains almost all gluten, it is not suitable for those who are intolerance to gluten or with celiac disease.

Gluten flour is mainly used in 3 ways - In baking, as a binder and used to make seitan and other meat alternatives.

Usually used in the making of bread, wheat gluten can improve the texture and provide structure to bread.

This is especially relevant when baking with low protein flours like rye or whole wheat. Due to their lower protein content, it will be harder for them to develop gluten, causing them to be dense and hard.

Just by adding a few tablespoons of gluten flour, the total gluten protein content increases, resulting in a much fluffier and chewier bread.

Typically, most baking sources and recipes will call for a tablespoon of vital wheat gluten per 2 cups of flour.

Seitan, also known as wheat meat, is a really popular protein source among vegans and vegetarians that is primarily made from vital wheat gluten. You can easily make some homemade seitan at home by combining gluten flour, water and seasonings to form a dough.

The dough is either being steamed, boiled or baked. In the end, you will get a meat substitute that is chewy, meaty and incredibly versatile. You can then chop it up, and add it into almost any recipes that calls for meat.

As a binding agent

Due to its sticky and elastic nature, vital wheat gluten works incredibly well as a binder for things like meatballs and burger patties. That way, they will hold their shape well and will not crumble easily.

If you can't have gluten in your diet, here are some suggested substitutions for vital wheat gluten -

Is it the same as gluten flour?

Yes, both vital wheat gluten and gluten flour refers to the same thing, which is a flour that is incredibly high in gluten with little starch and fat. Both terms can be used interchangeably.

How long does it last and can it go rancid?

An unopened bag of vital wheat gluten has a long shelf life of 7-10 years if stored in a well-ventilated dry environment. Once opened, store it in an airtight container and use it up within a year, or in the freezer to further extend its shelf life by 6 months.

Wheat gluten contains little to no fat. As the odds of an ingredient going rancid depends on its fat content, vital wheat gluten has a very small opportunity of turning rancid.

How can it help in bread making?

Gluten plays an important role in providing structure to breads and other baked goods. As vital wheat gluten is mainly made from gluten, you can improve the elasticity and chewiness of the bread just by adding a small amount, especially when baking with low protein flours like rye and whole wheat flour.

How much of it should I add in baking?

As a general rule of thumb, you will only need 1 tablespoon of vital wheat gluten per 2 cups of flour. But amount may vary depending on the flour used and its protein content.

Seitan and other mock meats

Spicy Vegan Andouille Tofu Sausages
These flavorsome and spicy vegan andouille tofu sausages taste alarmingly similar to the real ones! Chewy and meaty, they are easy and quick to make. Super versatile and can be used in any recipes that calls for sausages.
Check out this recipe

Seitan Vegan Chicken Breast
These vegan chicken breasts are super meaty and chewy, making them a great high-protein meat substitute! Easy to make and can be grilled, fried, or baked. Seitan chicken is also freezable, making it a great recipe to meal prep on the weekends.
Check out this recipe

Vegan Sausages
These vegan sausages are perfectly meaty, delicious and flavorful! Made from vital wheat gluten, it is easy to make and are freezable too.
Check out this recipe

Vegan Fried Chicken Drumsticks
Hearty, filling and chewy, this vegan version of chicken drumsticks will please even meat-eaters! Serve them with some mashed potatoes and greens for the ultimate comfort meal.
Check out this recipe

Vegan Roast
This tender and meaty vegan roast is hearty, meaty and utterly delicious! It is also easy to make and only requires 15 minutes of active cooking time. Best served with trimmings like peas and gravy.
Check out this recipe

Vegan Chorizo
Smoky and garlicky, this vegan version of Spanish sausage taste alarmingly similar to the real thing! Super versatile and can be serve on pizzas, added into stews or just have it on its own.
Check out this recipe

Vegan Meatballs
These baked meatballs holds their shape really well, and are flavorful, chewy and most importantly, vegan! Easy to make and ready in an hour.
Check out this recipe

Vegan Steak
Tender and juicy, this vegan steak looks and taste almost identical to real steak! Great for grilling and is high in protein and filling.
Check out this recipe

No Knead Whole Wheat Dinner Rolls
Make yourself some homemade fluffy whole wheat dinner rolls in the instant pot! No kneading needed, and is healthy, fluffy and easy to make.
Check out this recipe

Whole Wheat English Muffin Bread
This fluffy and chewy English muffin bread is quick to make, and is a great wholesome breakfast to have! Use any plant milk of choice to make this recipe vegan.
Check out this recipe

Homemade Bread Bowls
These bread bowls pairs well with almost every soup you can think of! The addition of gluten flour makes them extra chewy and soft.
Check out this recipe

Keto Bread
Fluffy and light, no one will guess that this bread is actually low carb and keto-friendly! It is also high in protein due to the addition of gluten flour.
Check out this recipe

Meaty TVP burgers
These super chewy and meaty vegan tvp burgers are hearty, flavorful and packed full of protein ! Better than store-bought and are meat-eaters approved.
Check out this recipe

Oven Baked Vegan Quinoa Patties
These veggie patties are made with quinoa instead of beans! You will only need a handful of simple ingredients and an hour to make these yummy yet nutritious patties.
Check out this recipe

Spicy Vegan Italian Meatballs
These vegan Italian meatballs are packed full of flavors and does to break apart easily! They are freezable and can be made just over an hour.
Check out this recipe

Vegan Chinese Seitan Stir-fry
Wondering what to do with seitan ? Try making this quick & healthy vegan Chinese seitan stir-fry ! It is packed full of flavors & super satisfying to have.
Check out this recipe

Vegan Philly Cheesesteak
Featuring chewy seitan and melted vegan cheese, this vegan Philly cheesesteak makes a great meal when you are craving something comforting! It is super filling, high in protein and can be made in 30 minutes.
Check out this recipe

Vegan Pho
This Vietnamese vegan Pho is cozy, warm and wholesome. Perfect for cold weathers and is tasty yet healthy at the same time.
Check out this recipe

Crispy Orange Seitan and Broccoli
Crispy seitan and tender broccoli are cooked in a rich savory orange sauce. Skip the Chinese takeout and make this for dinner instead!
Check out this recipe

I hope you find this post helpful and informative! If you do try any one of these recipes or have more questions regarding vital wheat gluten, feel free to leave a comment below. I love hearing from you.🙂

Hi, I am Meesha, the human behind My Plantiful Cooking! Expect to find plant-powered recipes that are easy to make and wholesome without compromising on taste.