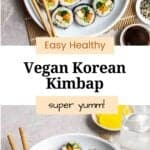 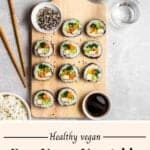 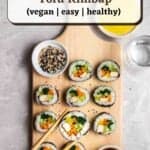 This vegan kimbap has all the tastes and flavors of the traditional ones! These rolls are stuffed with seasoned rice, colorful veggies, and marinated tofu. You can have them on their own or serve them with other Korean mains!

If you love Korean food, this vegan kimbap is a must-try! They are packed with different flavors and textures and are incredibly flavorsome and hearty. They transport well too and are great for stuffing lunchboxes.

Although this dish takes a bit more effort, the result is worth it! But no worries, this dish is still reasonably easy to make, and once you get the hang of it, you will be whipping up batches of kimbap in no time.

💚Why you will love this recipe

Kimbap, also known as gimbap, is a popular Korean dish consisting of seasoned short-grain rice and fillings wrapped in a thin nori sheet. Some common fillings for gimbap include bulgogi beef, vegetables like cucumber, carrot, and spinach, and pickled radish (danmuji).

To veganize this dish, we will be using tofu to replace the beef.

Difference between kimbap and sushi

Although kimbap and sushi consist of short-grain rice wrapped with nori, they are vastly different. Kimbap originated from Korea, while sushi is of Japanese origin for starters.

The filling of sushi and kimbap also differ significantly. The former is usually filled with raw fish or vegetables, while the latter is filled with cooked veggies, meat, and pickled vegetables.

🍚What you will need

Rest of the ingredients

Here is a quick rundown of the steps involved in making vegetable kimbap. As usual, the full recipe will be in the recipe card below.

Start by marinating tofu for 30 mins to an hour.

In the meantime, mix salt and sesame oil into the rice while rice is still warm. Set aside.

Heat some oil in a pan. Saute carrot for 4-5 minutes, or until it has softened slightly. Repeat the same for the cucumber.

Bring a pot of water to a boil, and prepare a bowl of cold water. Blanch your spinach, then place it immediately into the cold water. Drain well and gently squeeze out excess water.

Mix in toasted sesame oil and salt into the cooked spinach. Stir to mix, then set aside for later use.

Once the tofu is done marinating, pan fry them for 3-4 minutes, then flip and cook for another 3-4 minutes on the other side, or until both sides are nicely browned.

Place a sheet of nori on the bamboo mat. (shiny side facing down)

Spread out ¾ cup of rice onto the seaweed, leaving 2 inches gap uncovered on the side facing away from you.

Layer up carrot, cucumber, spinach, and pickled radish about 1 inch away from the side facing you.

Roll the bottom edge over the filling while simultaneously tucking filling in to keep them in place. Continue to roll it up tightly while gently applying pressure until kimbap is sealed.

Brush some toasted sesame oil on your rice rolls.

Using a sharp knife, slice kimbap into bite-sized pieces. Serve vegan kimbap immediately, or keep it in an air-tight container if you are serving it later in the day.

Here are some other filling ideas for your vegetable kimbap. Feel free to swap or add in any ingredient below that sounds good to you!

How long will kimbap last?

This vegan kimbap is best served fresh but will last a couple of hours at room temperature. Make sure to store them in an airtight container to prevent them from drying out.

If you plan to enjoy them the next day, leave them unsliced, and place them in an airtight container before refrigerating. Reheat them in the microwave before enjoying them.

Is kimbap eaten hot or cold?

Kimbap is usually enjoyed at room temperature, but you can also heat them slightly if you prefer them to be warm. As rice turns hard upon refrigerating, I would not recommend eating them cold.

How do I serve them?

Gimbap is most commonly enjoyed as it is without any dippings or sides. However, you can pair them with dipping sauces like soy sauce or gochujang sauce if you like. Veggies like pickled radish and kimchi also pair beautifully with this dish. 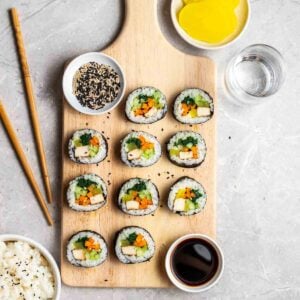 Meesha
This vegan kimbap has all the tastes and flavors of the traditional ones! These rolls are stuffed with seasoned rice, colorful veggies, and marinated tofu. You can have them on their own or serve them with other Korean mains!
5 from 1 vote
Print Recipe Pin Recipe
Prep Time 20 mins
Cook Time 30 mins
Total Time 50 mins
Course Main Course, Side Dish, Snack
Cuisine korean
Servings 4 rolls
Calories 307 kcal

Rest of the ingredients

Prevent your screen from going dark

*Tofu - Use extra-firm tofu that has been drained and pressed beforehand. You can press tofu either using a tofu press or by stacking something heavy on top. If you are unsure on how to press it, I recommend checking out this guide on how to press tofu.  **Rice - I recommend using short-grain rice, be it white or brown. Freshly cooked rice works the best. Heat rice slightly in the microwave before adding the seasonings if using leftover or cold ones.   Helpful tips

Nutrition info calculated is just a rough estimate and is provided as a courtesy. Bear in mind that value will vary based on variables like specific brand or type of product used. To obtain the most accurate representation, it is highly recommended that you calculate it on your own with the actual amount and type of ingredient used.

Did you make this recipe ?Tag @myplantifulcooking on Instagram !

Hi, I am Meesha, the human behind My Plantiful Cooking! Expect to find plant-powered recipes that are easy to make and wholesome without compromising on taste.